Mt. Loretto was the site of an orphanage and farm founded by Father Drumgoole, the unofficial patron saint of homeless children and newsboys, in 1882. 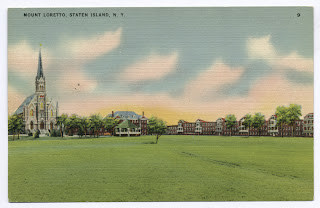 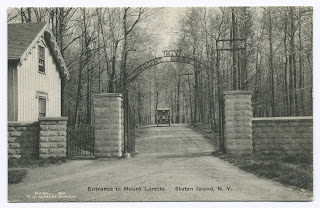 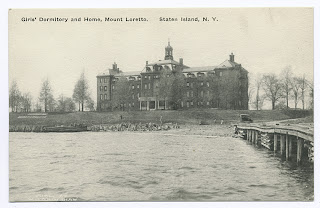 From MIV Mt.Loretto: " In June 1882, six months after establishing the MIV in downtown Manhattan, he purchased the 400-acre country place and a large beach area off Raritan Bay on the Southern tip of Staten Island, called Mount Loretto. The  mission was able to care for more than 2,000 homeless and destitute children annually.  In the period from 1871 to 1885, the mission had cared for 15,730 children.The kids made their own clothes and shoes, grew their own food, and raised livestock and poultry. The home was completely free of debt.
Mount Loretto was cultivated into the most productive farm on SI, the largest in the state and the 3rd largest in the country. At peak production, 1,000 quarts of milk were produced daily.  The barn, reputed to be the largest in the country, housed 300 head of cattle and 50 horses, the pen kept 600 pigs.  The dairy farm, the 3rd largest in NYS, was closed and the herd was sold in 1961.

Mount Loretto has the last undeveloped shoreline in the state, encompassing one mile of seashore. The property is an ecologically rich area of meadows, woodlands, wetlands, coastal bluffs, and shoreline. The "Mount" property, which has been fallow for 4 decades, is valued at more than $40 million."
The area is now under the auspices of the NYS Dept. of Environmental Conservation 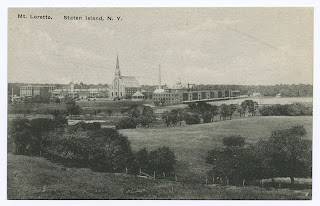 A shrine overlooking Princes Bay: according to the plaque it was erected in 1935 by Katherine and Helen Tracy as a memorial to their brothers, apparently it's become a memorial to the more recently departed as well. 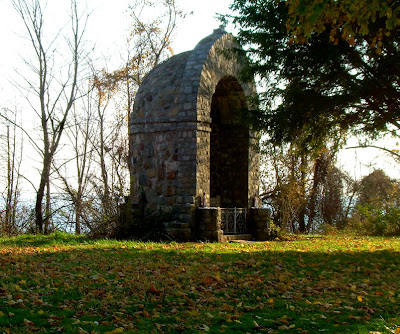 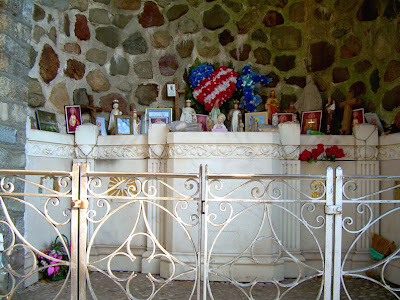 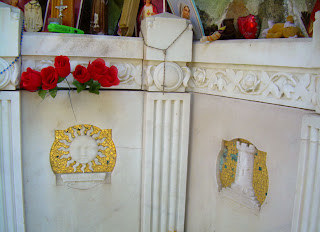 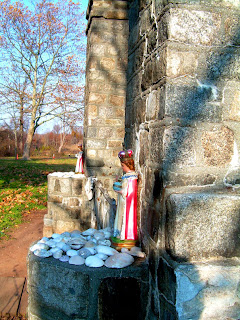 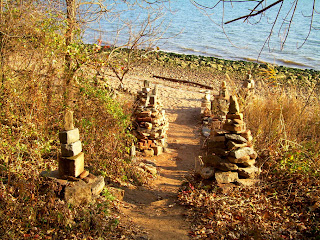 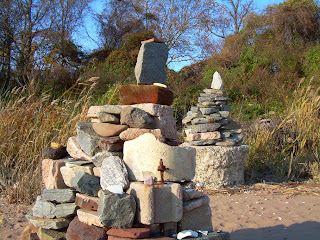 Makeshift shrines on the beach below
For more info:


Lemon Creek Park:
The park is just east of Mt.Loretto.
Lemon Creek is fed from a watershed that begins two and a half miles from the creek. The water travels over and under ground which carries it down to Princes Bay. A freshwater pond, only 100 feet from Raritan Bay, is adjacent to the marina and to the only purple martin colony in New York City. 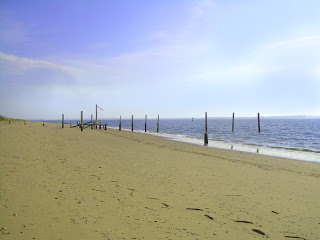 archival photos from NYPL
all other photos copyright nycedges 2010
Posted by ny edge No comments:

The Ridgewood Reservoir in Highland Park on the Brooklyn-Queens border:
The middle basin shown here is largely intact, the two outer basins were drained in 1989 and have returned to a natural state. 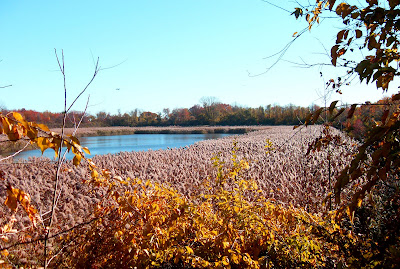 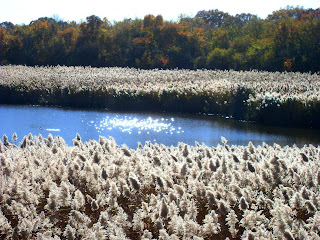 from wikipedia:
"In 1898, Brooklyn merged with the City of Greater New York, thus gaining access to the superior New York City water supply system. Ridgewood Reservoir was expensive to operate because of the need for pumping and was slowly made obsolete by expansion of New York City's Catskill and Delaware water systems. Ridgewood Reservoir became a backup reservoir in 1959 with the third basin being filled with water from the Catskill system. The reservoir was last used in a drought in the 1960s. During the 1970s the reservoir was the site of illegal swimming and a number of drownings. The reservoir was finally decommissioned and drained in 1989.
Following decommissioning and abandonment, the reservoir naturally became a small birch forest (one of the few on Long Island) with a grassy marsh in the center basin. The creation of this virtual nature sanctuary attracted a wide variety of fauna, including some rare species of birds. The bicycling trail around the reservoir perimeter became part of the 40-mile (64 km) Brooklyn-Queens Greenway.
In 2004, the reservoir was officially turned over to the Department of Parks for more extensive integration into Highland Park. In October 2007, the Parks Commissioner Adrian Benepe quietly unveiled a contract to breach one of the reservoir basins and clear 20 acres (81,000 m2) for new ball fields. However, on June 26, 2008, NYC City Controller William C. Thompson, Jr. rejected that contract for the new development, citing concerns about the environmental impact"

So far community activists have been able to block attempts to fill in and develop the reservoir -- for more information on their efforts: http://ridgewoodreservoir.blogspot.com/

all other photos copyright nycedges2010

Posted by ny edge No comments: 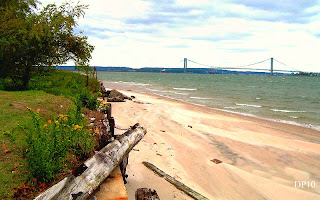 "Coney Island Creek is the sole remaining creek in the area. In the 17th and 18th centuries many other creeks cut through Brooklyn, but all others were filled in as Brooklyn developed. The Creek has undergone many topographical and name changes throughout its history.
In the 17th century, the creek did not extend so far eastward, ending instead around what is now Cropsey Avenue. A small portion of land in the now narrow section of the creek connected to the mainland, forming a peninsula. This peninsula was known as Coney Hook. In order to facilitate sea travel, Thomas Stillwell and his associates dug a canal from the eastern front of the creek, around Cropsey Avenue, eastward until they hit “the Cove,” now known as Sheepshead Bay. The developers hoped the canal, referred to as Gravesend Ship Canal, would transform the area into a thriving seaport. The canal was later filled with earth to what is now Shell Road, significantly shortening the creek.
Gravesend Bay, into which Coney Island Creek flows, was the site of famed Central and Prospect Park landscape architect, Calvert Vaux’s (1824-1895) death. On a foggy November morning in 1895, while visiting his son who lived nearby, Vaux went for a walk. He never returned, however, and his body was later found floating in the bay. There has never been a definitive cause of death, as some say he committed suicide because his work was under-appreciated and others say the fog and his unfamiliarity with the setting lead him to accidentally fall into the bay.
This park, bounded by Sea Gate and Bayview Avenues and Gravesend Bay, was assigned to Parks in 1984. The area is mostly comprised of many types of grass, shrubs, and trees. A small garden is located in the area with a multitude of flowers and a small stone and brick path. A large sand dune was placed on the property in 2001 in order to stop erosion of the nearby Coney Island Beach"
from NYC Parks Dept. http://www.nycgovparks.org/parks/B379/highlights/11734 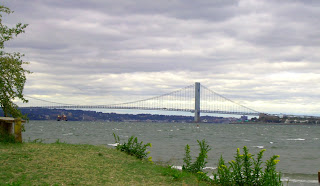 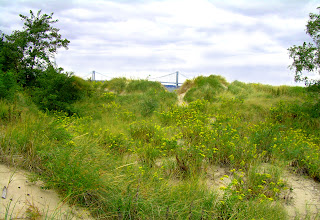 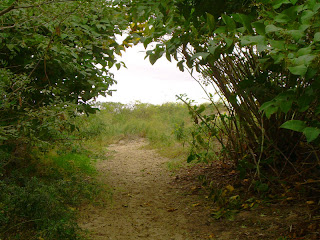 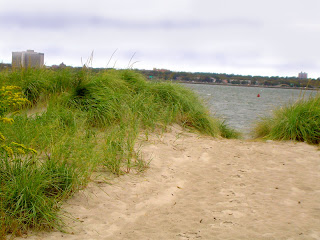 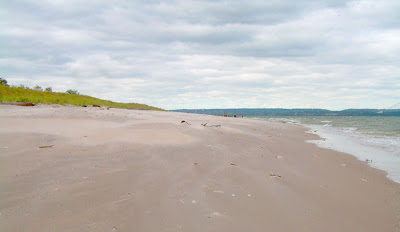 If you'd like to read more about the ship graveyard in the creek:
http://www.nytimes.com/2006/08/06/nyregion/thecity/06grav.html/partner/rssnyt?_r=1
or the curious yellow submarine 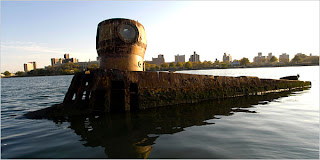 Posted by ny edge No comments: