Not much has changed on the Ft. Tilden grounds since my last visit, nor for that matter since it was decommissioned in 1974, but what has changed radically is the scene on the beach.


The unregulated beach used to be a sanctuary for folks who didn't care about the lack of amenities in exchange for a spot where you could fish, let your dog off the leash and, if so inclined, sunbathe au natural.
The dunes were the only areas that was restricted in order to protect the nests of the endangered piping plover.
Apparently the dunes are no longer protected, the shore birds were no match against the invasion of the new, non-native species. 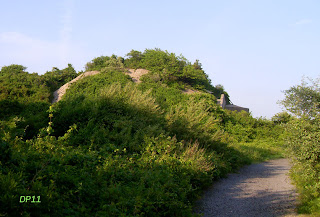 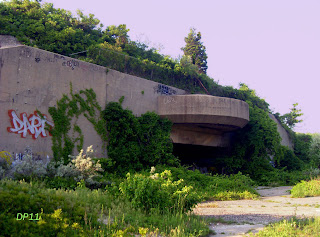 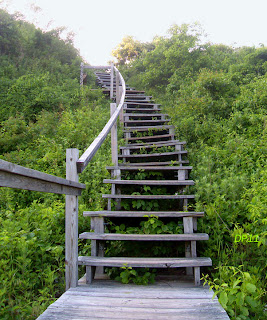 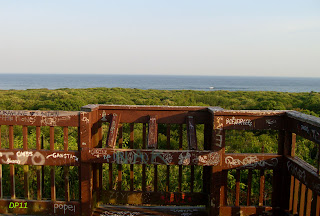 Atlantic Ocean to the south 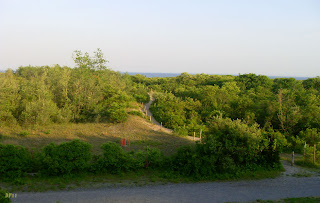 Marine Parkway Bridge and Manhattan skyline to the north 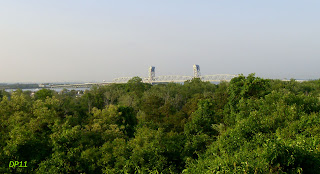 Although many of the buildings have been left to decay, the community gardens, Rockaway Theater company and Rockaway Artist Alliance are injecting new life into the old fort

Some of the history:
The fort began as a coastal defense station during the War of 1812, expanded into a full military base at the beginning of WWI, fortified for WWII and used as a Nike missile site during the Cold War.

the Nike missiles from 1959

Breezy Point:
The last time I photographed these areas was in the Fall when, except for a few fishermen and local wanderers, it was deserted (click).  On Memorial Day weekend it was a different story.

﻿
﻿
Unlike the eastern end of the Rockaway peninsula which had been a beach resort since the early 19th century, Breezy Point (which includes Rockaway Point & Roxbury) didn't become a summer retreat until the early 20th century.

"Had you planned a visit to Breezy Point before the Civil War you would have been in for a surprise. It did not exist! All the land west of the vicinity of Jacob Riis Park has formed within a little more than a century. This is largely because of the construction of a groin field to protect the beaches at Fort Tilden, and the placement of the Breezy Point jetty to prevent the filling of Rockaway Inlet. The sand has been contributed naturally by the westward longshore drift along the south shore of Long Island, particularly the Rockaway barrier island and sources offshore.
The Rockaway Shore areas have been heavily utilized since colonial time. Fort Tilden began as an outer harbor defense post during the War of 1812. The site was expanded into a large defense network with ever expanding fire power beginning at the turn of the century following the Spanish American War." USGS 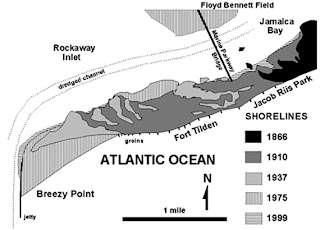 ﻿At the turn-of-the-century entrepreneur Andrew VanDeventer formed the West Rockaway Land Company and the development of Breezy Point began with a tent city, bungalows and a few hotels. Since lumber was scarce it was brought over by barges from Brooklyn, some of it from the grand hotels that were being torn down in Coney Island. 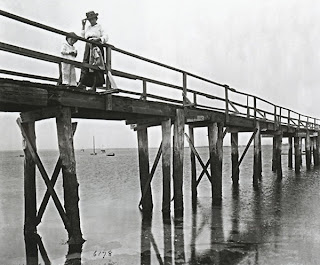 By the 1920's there were thousands of tenants in the bungalow colony, they united to form the Rockaway Point & Roxbury Association to wrest control of the community from the Rockaway Land Co.  After years of legal battles they bought 500 acres and created the Breezy Point Cooperative in 1961. Residents purchased shares in the cooperative and divided up lots to build their own homes. 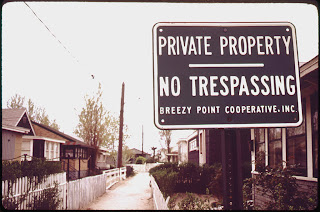 Access is restricted to owners, renters and guests, the entrance to the cooperative is guarded by a security checkpoint and its privately owned streets are blocked to unauthorized traffic by electronically locked gates controlled by magnetic key cards.
The community is also known as the "whitest neighborhood in New York City" where 99% of the residents are white and 60+% are Irish American -- the 2nd highest concentration in the U.S. -- no wonder it's been called the Irish Riviera for almost a century. 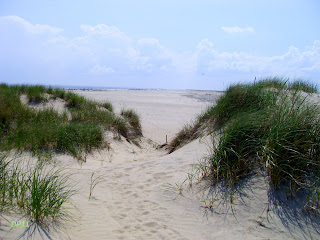 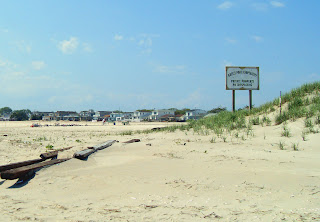 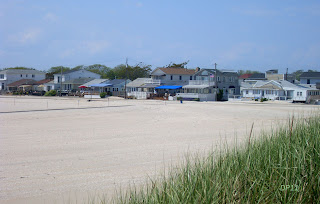 On the beach blocks the streets narrow into sidewalks and paths, so the preferred mode of transportation is bicycle. 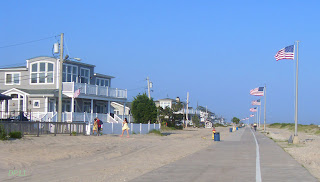 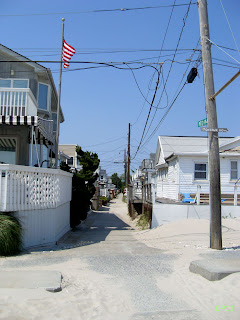 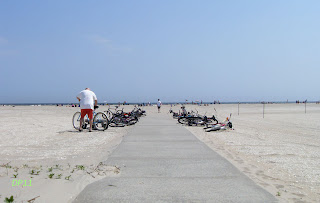 In 1972 the National Park Service bought the 200 acres surrounding the Co-op, and after the jetty was built, the newly formed Breezy Point Tip. The area is a bird sanctuary and the dunes are roped off to protect the nests of skimmers, terns, oystercatchers and the endangered piping plover. 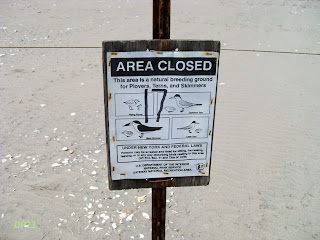 The locals refer to the western end as Birdland and the birds do rule the beach here. 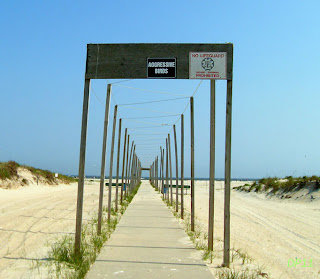 black skimmers take over their spot 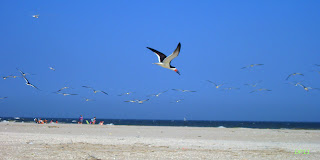 common terns have theirs 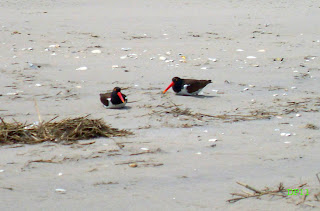 Before the Park Service bought the land between Ft.Tilden and Breezy Point the area had become a dumping ground. Construction was halted on a hi-rise building complex, the official reason was to create the nature preserve, although the rumors were because it was too close the Nike Missile system (part of which can be seen behind the unfinished buildings). 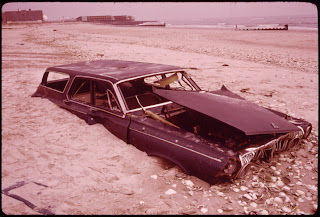 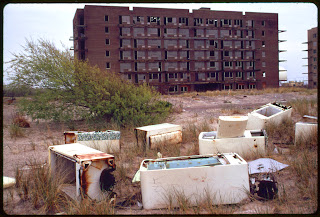 Continuing out to the jetty and around the tip to Rockaway Inlet and the bay side. 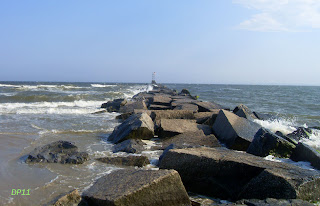 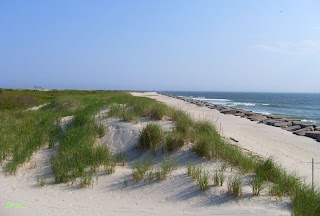 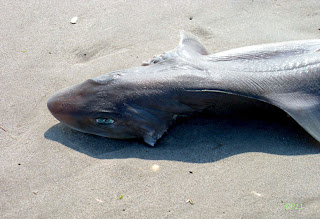 ....and few feet away another one.  I found out these are a type of shark known as Smooth Dogfish.  Since they were still "fresh" I suspect they were thrown back into the water by people fishing from boats in the area even though they are edible. 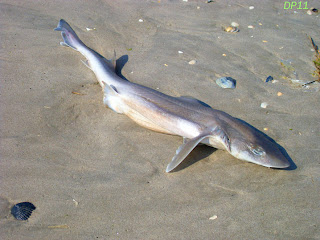 Around the bend to Rockaway Point and the Lighthouse, which isn't a lighthouse at all, but a spotting station for Ft.Tilden which I will cover in part 2 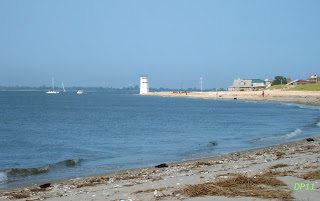